Yesterday, DD and I made Christmas puddings. Until I was in my mid-twenties my maternal grandmother made them. Then, when she was too old to stir the mixture [1.5kg of fruit gets a bit heavy], my mum started helping; then she took over the job. Four years ago my parents decided it was my turn [as eldest daughter]. DD and I used the recipe my nanna posted to my mother from England. That would have been 1957 because that was the only Christmas they had apart from mum's birth in 1934 until nanna died in 1989 [with the exception of the war years when mum was evacuated in Wales]. I have a photocopy of the original recipe - I think mum still has the original. 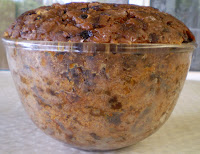 Anyway, DD and I made the puddings in two batches and we mixed the dry ingredients by hand [no, a hand, not a spoon] - it's so much easier. The fun part of the tradition comes at the end - the final stirring when the threepences are thrown in [yes, we use real pre-1966, pre-decimal money - the coins are silver and are therefore not poisonous, unlike modern money]. Everyone in the house gets to stir the pudding, throw in at least one threepence and make a wish. SIL2B couldn't be here, he works on Sundays, so we made wishes on his behalf! Don't know if it works that way but we did it anyway. We had 16 threepences; last year we had seventeen so we won't surmise about what happened to the other one! LOL 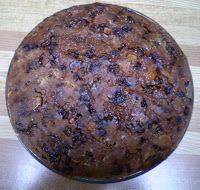 The puddings took a while to cook - seven hours for the smaller of the two; about eight and a half hours for the larger one. But they're done and that's the main thing. The photos are both of the smaller pudding; the birds'-eye view is a more accurate colour.

So Carol, there you are, one Christmas tradition for you. Your turn to show me the knitting!!!!
Posted by Lynne at 4:15 pm