I have signed up again for Southern Summer of Socks. Last year I didn't finish a single pair in the six months the KAL ran due to being diagnosed with a frozen left shoulder in October [no knitting for eight weeks] and a frozen right shoulder in January [no knitting for five weeks]. Gripping those tiny needles [2.25mm] is still very difficult and causes me a great deal of pain if I knit for too long. People have suggested to me that I learn to knit without moving my shoulder - I can and do but most people are not aware that the shoulder is involved even if you think it's not. I can't, for example, roll my hand over to face palm upwards due to the restriction in my shoulder. One would think that involves only the elbow and the wrist but it doesn't. I'm much better now than I was at the beginning of the year, then it was almost impossible.

Enough of the frozen shoulder problems - as I said, I've signed up for Southern Summer of Socks. Socks are great for summer knitting, they're small and light for hot weather and easily portable for travelling. I just have to remember not to knit them for too long. My sock yarn stash seems to have multiplied greatly this year; I have enough yarn to knit at least twenty pairs of socks! Even at a sock a week I can't use it all this summer!! And a week to knit a sock seems reasonable given the stress to my shoulder and forearm from knitting with small needles.

On Saturday, I ripped out a sock that had been finished for several weeks [except for the toe grafting]. I had mistakenly used provisional cast-on instead of invisible cast-on and when I pulled out the waste yarn I lost several stitches [sock yarn is so fine!]. I couldn't remember the vital statistics [no I hadn't written them down; how often do others think "I'll remember that" and later find they don't?] so I pulled the whole sock out and started again with an invisible cast-on. My Fair Lady screened on television on Sunday afternoon [man, that’s a long, but enjoyable, movie - 3 ½ hours with ads] so I spent a leisurely day in front of the television knitting about half a sock. 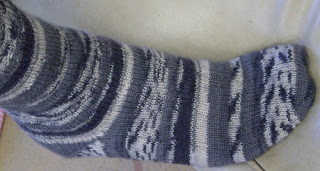 But I paid for it later; my left forearm was so sore I could knit no longer and since I'm left handed, I couldn’t crochet either [boo-hoo]. But, here it is - the first of my Moda Vera socks. They're charity knitting - possibly for the homeless, possibly for an Aboriginal community. It depends which charity comes up first on our 2009 calendar.

This afternoon, we are off to visit the parents in Bingara [north-west NSW]. We are staying in Nundle tonight and spending the morning there tomorrow which includes a trip to the Woollen Mill [my second in six months]. Last time we went, it was only DD and I; she wants to spend more time looking around the town with her dad before she gets married in January [one last family break, so to speak]. My dad turns 80 this Friday but is having a low-key celebration. There are some jobs that need doing around their place so my WM has taken a couple of days off work to do them - that's one reason why he's a Wonderful Man!