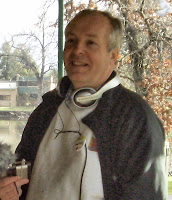 This morning I was a ring-in [as was DD] at a Ravelry barbecue breakfast! David had told me on many occasions about the breakfast but never that it was for Ravelry members! I think he just assumed I was a member! No one checked my Ravelry membership so there I was - having breakfast with a sizeable contingent of Australian Ravelry members. I knew some of them: David, of course, Donna and Meg. Some of them had blogs that I've read but right now I don't remember their blog names. The editors of Yarn magazine were there but I didn't get a chance to talk to them or to tell them what a great magazine it is! Biggest excitement for me was meeting Sharon, who is also a member of Knit4Charities! Sharon won a couple of prizes; she had the greatest number of hand-knitted items on her person, starting with her socks and ending with her ear-rings, which were also socks. At first, I thought they were knitted flat but no! They were fully formed, tubular knitted socks! Her daughter was also wearing a pair! [Both pairs knitted last night I believe]. Because I was wearing a hand knitted jumper made from Cleckheaton Country 8ply I won a pattern book [as did all the other members who were wearing something knitted from Australian Country Spinners yarns]. 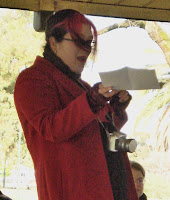 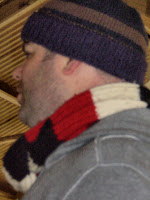 Thanks to Feisty Wench [I think this is the right link] for organising the day and Damo, of Australian Country Spinners, for "commercialising it!" [his words not mine].

I took some photos of the Ravellers but not being one I haven't uploaded them.

From the breakfast to the Mill shop! It was still cold [I forgot to take a photo]so the warmth of the shop was very welcome. Despite being told there was not much in the bargain shop, there was enough there to satisfy me! I bought two kilograms of 8ply white/cream pure wool [Classic] for $80. That's $2 for a 50g ball! I could never get pure wool at that price at home, not even on sale. I also bought some 'scraps' - bags of leftover yarns for $1.00 each. I bought six bags because they had mostly white yarn in the m and I can use the scrap yarn to do the dyeing experiments then use the yarn to knit up little items or as part of a larger item. The scraps weren't in balls but that's okay - that's what wool winders are for!! I also bought some sock yarn [$6.00 100g] and some wool [I think it's called roving] for felting or spinning! DD spins, I want to try felting, both wet and dry!! Two of the 'new' crafts I mentioned in yesterday's post. Plus I got three free jumper/cardigan patterns!! So my budget is blown but I have enough to keep me happy for a while yet!! DD is getting married in January so what better present can I give her than the beginnings of her very own yarn stash!! LOL

Back to our cabin where the air-conditioner works well! Brunch for me, juice only for DD. She hasn't been well for a week, hasn't slept well either for the past few days. She went to bed four hours ago so I think it's time to wake her up. And me...knitting [blanket for Wrap with Love], reading ["Sense and Sensibility" and Yarn magazine Issue 3 which I bought in Wangaratta], tea and chocolate! Soon I'll begin the packing so we can get away early tomorrow - we have a 860km [548 miles] trip home and I have to do it one day as I have a class to teach on Monday!

This is the end of my long and frequent posts; I can't promise they'll continue when I'm back at work! I hope you've enjoyed sharing the trip with DD and I! See you back in Penrith!
Posted by Lynne at 3:20 pm