I dreamt that my [ESL] students and I were knitting provisional cast-ons! And, even more strangely, we were listening to the news: someone was in danger and our knitting could save them! [And then I woke up - the English teachers' pet hate at the end of a text!!]

Bizarrely, when I finally went back to sleep [two hours later] I dreamt about knitting again!

So, what's with the provisional cast-on? Last weekend I attended a lace workshop tutored by Raelene for the Blue Mountains branch of the Knitters' Guild and I learnt provisional cast-on. I've tried it before but became frustrated by the stretching apart of the provisional stitches when knitting the first row - apparently this is normal [the stretching not the frustration]. We knitted several repeats of a feather and fan stitch pattern and then learnt how to knit a border without breaking off the yarn from the body of knitting! Traditionally, lace knitting [and knitted lace] is not sewn together because sewing doesn't have the elasticity of knitting; however, it's easier to write patterns where x number of pieces are knitted and then sewn together. Knitting the border on is easy and I don't understand why it can't be part of the pattern explanation. Anything that involves less sewing up would be welcome by most knitters, I would think!

After the Guild meeting, we were shown the correct method to block. Blocking is essential to lace making - sometimes lace looks like nothing until it has been blocked but then it's revealed in all its awesome glory! Hint: If giving [not "gifting"] the lace project to a non-knitter, block it several times so that it is more likely to hold its correct size and shape.

Two things we didn't learn [and I wished I'd known to ask]: the best way to sew in ends and if there are any special techniques for joining in a new ball of yarn. Of course, the best way is to avoid joining yarn at all - buy yarn in big skeins!!

Since the workshop, I have cast on a scarf in white 3ply baby yarn (on 3.75mm needles) as a gift for a dear lady's 80th birthday. I'm knitting the horseshoe print stitch pattern from the Harmony Book of Knitting Stitches. I have not yet decided what border pattern I will use. Each pattern repeat [8 rows] measures about 28mm and I have done 15 repeats since Monday so I think I will easily finish and block it by 20th October. This is what it looks like so far. 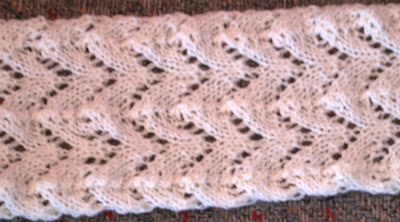