A couple of days ago I was working in my sewing room and thinking about all the different projects I had going on so it seemed time to share them.

Why don't I start with my knitting projects? That is how this blog started after all!

The older of the two knitting WiPs is a pair of socks I cast on in October. I knitted the first sock to the heel turning then stopped -- turning heels requires concentration which, for me, means solitude. Last weekend, as I waited for the workshop I was tutoring to start, I began turning the heels (and put them away when I got to the part where concentration was really needed). For those who care about such things, I use an hourglass heel (from Lynne Vogel's Twisted Sisters Sock Workbook) as my "go to" heel. It was the first heel I learned to make and, even though it was difficult to teach in my workshop in 2012, is still the heel I prefer to knit. 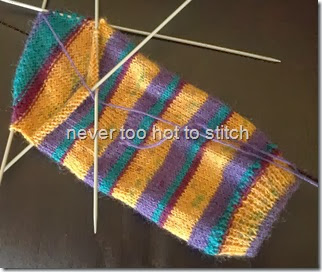 My other knitting project, which was started on Christmas Eve and is now too big to work on in the current hot, humid weather, is my own design. I've called it Nouveaux Log Cabin. It was inspired by the Moderne Baby Blanket (from "Mason-Dixon Knitting" by Kay Gardiner and Ann Shayne). It is based on Fibonacci numbers, given that each section is based on the numbers 1, 2 or 3 -- 1 being fifteen garter stitch ridges. The finished blanket should be approximately 72" x 42". I have worked the sections out to get these dimensions and have the same number of sections across the blanket as down its length.  I particularly like the look of the one garter ridge done in white at the beginning of each section. 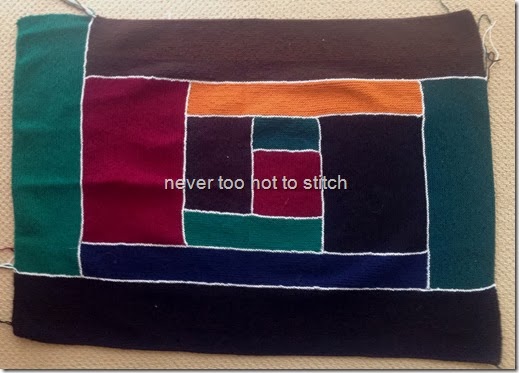 I have worked on three different quilting projects in the past four weeks; four in the past three months.

The Hearts quilt is the only project in this post that I haven't touched in the last four weeks. I need to make a decision about how I'm going to quilt it and get to it! It remains 30 disconnected blocks. 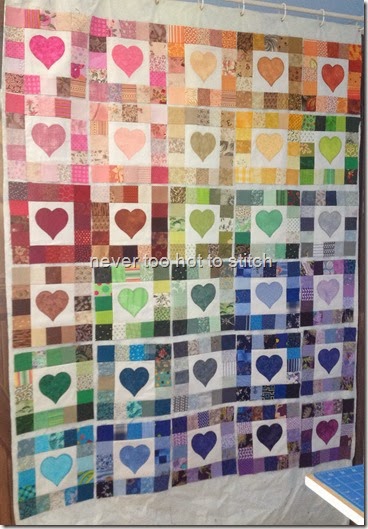 The project that has had the most attention this week is Violet and Friends quilt. I made the crumb blocks for the Rainbow Scrap Challenge (SoScrappy blog) during 2011 and 2012 but only started putting the blocks together into a quilt top last month. 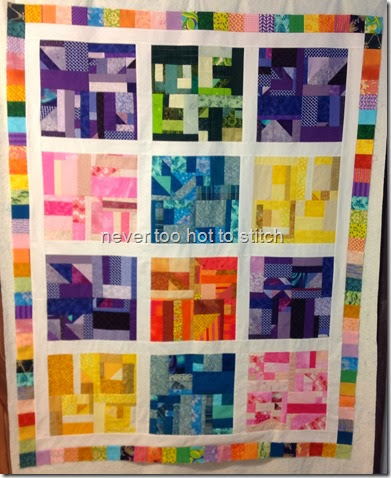 This week I have been working on making the backing. It never ceases to amaze me how much time it takes to press fabric, cut strips, join strips, press seams, pin strips to blocks, sew strips to blocks and press seams. It took me all my sewing time on Tuesday (several hours) to do the above (and press the whole flimsy now that I have a new iron which gets hot enough to do the job properly!) and all I added were four 2” white borders to the flimsy seen above, and two long strips to the backing panel.

In class last week, I finished a block for the Sampler Quilt I've been making (on and off) for a year. It took me the better part of three hours to finish about half a block! I'm not the world's fastest patch-worker, that's for sure! This block is called Weathervane. It looks very tricky but really, it's just a fancy nine-patch (as are all the blocks in the sampler some of which you can see here). 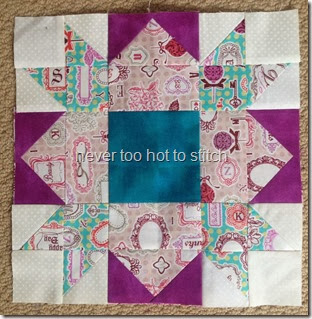 My newest project in terms of deciding what to do is really the first of these four to have got started. Back in 2011, before I started classes with my current teacher, DD and I used to attend all-day Saturday classes once a month. At one of these workshops, I learned several ways to make half square triangles (I documented it here and here). when I read about the Relaxing Robin (SewUQuilt2 blog), I decided to make one of these orphan blocks my Relaxing Robin project. I won't go into too much detail here, this will get its own post later this month. 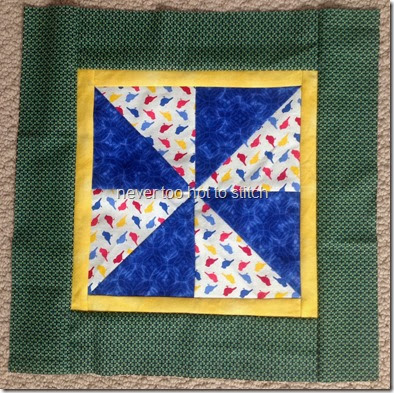 I have one hand-stitching WiP – my Dutch Cap Hexies. This is a very long term project given these are 1.5” hexies and diamonds I’m sewing together. This is what I’ve done so far (not the final layout): 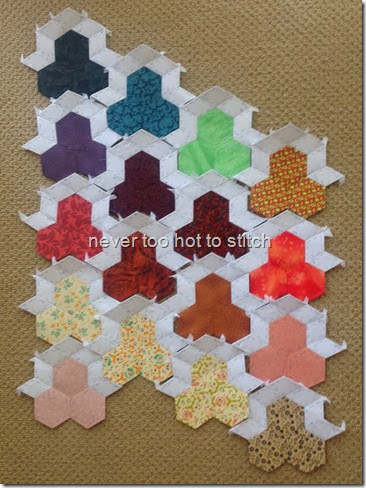 I have a pile of “hexie triads” ready to go, and over the last few days have basted all these diamonds (I’ve run out of papers so I have to wait for LQS to get some more). Plenty of sewing to be going on with. 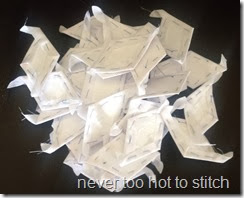 Finally, my newest baby, brought into the world on 12 February: when finished it will be a large pin cushion done in candlewicking using colonial knots and some stem stitch on homespun with perle cotton. 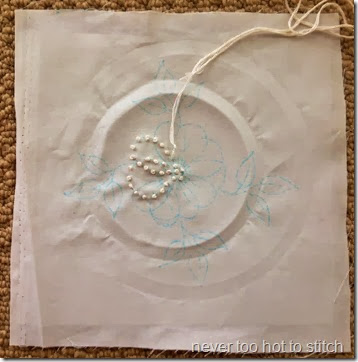 What about you?
What projects are you working on?

Linking up with WIP Wednesday at Freshly Pieced blog and Yarn Along at Small Things blog.

Edited to add that I am also linking up to Hexie Weekend at a Quilting Reader's Garden blog.

I have also joined the EPP QAL group on Flickr.
Posted by Lynne at 11:35 am