Something Old, something New – July edition

What a month June turned out to be: five days staying with my mother, three weeks with bronchitis, another three-day trip away to tutor two knitting workshops (“stranded colour knitting” and “using slipped stitches for colour and texture”) and hosting a couple who were billetted with us for four days! Needless to say, not much sewing happened during the month.

My stats show that less and less people are signing up for Something Old, something New each month; in fact, less and less people are visiting my blog period! I am tempted to stop the linky party right now but I need something to keep me working on my old projects – they have a way of wearing me down after a while! Just knowing they are there, in the background, whatever life throws at me, makes me want to get them finished! So, Something Old, Something New will continue, despite the fact that I seem to say the same thing -- “almost no progress” -- every month!

In June, my “Something Old” project was to have been a pair of curtains I started way too long ago. Those poor old curtains never even made it out of the cupboard! What little time I had in front of the machine (not a lot when you’re coughing ‘fit to bust’) was spent working on the Country Houses quilt, which had been my Something Old project earlier this year. I was working away on it, making reasonable progress, when I found a small hole right on the seam line of one of the central blocks! I had to unpick some quilting, and open the backing and wadding (it’s a quilt-as-you-go project) to access the seam in question. I really didn't know what to do so I took it to my quilting teacher. I hadn’t been in class for weeks because I hadn’t wanted to share my germs so it wasn't until the very last day of June that the hole was repaired! (Sorry, I forgot to take a photo and the repair is almost invisible!) 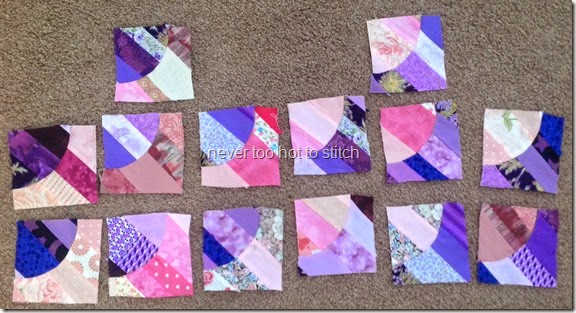 and in class (after repairing the hole) on foundation piecing so at least some progress was made on my Something New techniques!

My crafting plans for July are as follows:
I have decided that I will do all ten of these things in July, which is quite ambitious considering how little I usually get done! Some of them are only little projects  so I think it's possible to get it all done... I have listed them here in the order I plan to do them but, who knows?!

What about you?
How did you go with your plans in June?
What are your plans for July?

Remember, your “Something New” project can be to start something new or learning (or practising) a new technique! (This month I'm doing both!)

Please link the URL of your specific blog post here so others can come and check out what you’re up to!