Some time ago - just a few months actually - I was sure I would never knit socks. Why knit socks when you can buy them for $2 a pair? WM even gets his free as part of his uniform! But I was intrigued by the idea and seduced by the beautiful colourful socks in Lynne Vogel's The Twisted Sisters Sock Workbook. I borrowed that from the Guild library to read about dyeing and colour theory but got sucked into socks!

I knitted the first pair from 8ply acrylic. I was curious to see how the new Effects range from Carnival would knit up in a sock. Very nice! The photo's a bit green, but I needed to bump it up to reproduce the colours more accurately.

WM saw that first pair and wanted some. He can only wear them on Sundays because he works six days a week and has to wear regulation issue socks!

Here's his first pair. They are knitted from Heirloom Jigsaw colour #26.

If he can only wear handknitted socks one day a week, why did he need a second pair? Here they are - Heirloom Jigsaw colour #29.

I was addicted but WM didn't need any more handknitted socks, and DD refused to consider the idea! I wear conservative black or brown socks and didn't even think about a pair for me! So, it was back to the charity knitting. This has advantages: warmth is the issue so 8ply is a good thickness, and 8ply knits up quickly; I could try all kinds of stitch patterns; and whatever size I knit them, the socks will always fit someone!

First off the rank: a brown fair isle pair which, like the blue pair, knitted up very softly considering the size 3.25mm needles [8 ply is usually knitted on 4mm]. Then I cast on a pair of navy socks in a beautiful soft acrylic I bought in Spotlight for just $2 a skein. I knitted those socks while staying with my parents for a few days. Mum loved them so much I gave them to her [before I took a photo]. She assured me she would only keep them for 'good' and would handwash them! Mum, they're acrylic! Throw them in the machine and when they're worn out I'll knit you another pair!! 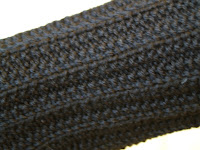 Another navy pair followed, this time in stocking stitch, which didn't photograph well. Then a black pair in a moss stitch rib, shown here in close up. This pattern is similar to the one I used for mum's socks - for her it was broken rib [also known as mistake rib]. And then, another pair of black socks in a rib pattern.

Then came the experiment with different coloured toes and heels which was not as successful as I would have liked! Think I'll stick to single yarns in future!

These socks are mostly in dark colours because they will be going to homeless people and somehow I just think dark colours would be more useful. They're acrylic because it's inexpensive for me and hardwearing for the wearer - and acrylic doesn't need careful handwashing and blocking!

That's nine pairs of socks in three months! Oh yeah, I have the tenth pair of socks [from Tofutsies yarn] on the needles waiting to be grafted [Kitchener stitch] and they're for me! :-) The only reason they're not finished is because I'm not sure if the foot length is right - I don't want to graft, sew in the ends and then find they're the wrong size! Any suggestions for getting a good fit while there are still needles in the toes?

Now I've learnt how to do a provisional cast-on, I won't have the above problem any more because I'm going to try toe-up socks. And, to feed my addiction, I've joined Bells and RoseRed for the Southern Summer of Socks KAL. Why don't you join us too?
Lynne at 10:40 am